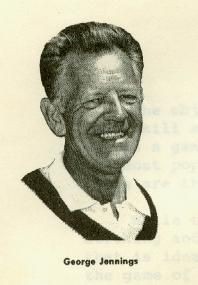 George J. Jennings, Jr. was best known for teaching his love of the game of tennis and for his many personal tennis accomplishments on the court. George’s playing days were best known for being a multi-year Champion in Men’s Singles under the auspices of the United States Lawn Tennis Association National Public Park Championships in 1928, 1929, 1930 and 1931. He was also the Men’s Doubles Champion in 1927, 1929, 1930 and 1931. George had direct wins over Bill Tilden and other tennis legends during the days when tennis was only an amateur event. George served in the US Navy and retired as a Captain. After the Navy, George’s career centered on the Chicago Public School system, serving as an administrator. In the mid 50’s, George started the George Jennings Tennis School at Lake Forest College. The school was primarily a summer-season school that became what we know today as a tennis academy. He was also a tennis professional on the south side in the Beverly area, and one of six professionals on the US Dunlop Racquet Advisory Staff. George’s students came from as far as Peoria, but the concentration was from the entire Chicago area. He developed nationally and Western-ranked players from Oak Park, River Forest, Winnetka, Glencoe, Highland Park and Lake Forest. The lessons were drawn around sportsmanship, introducing one-self, remembering names, the value of a smile, as well as keen in-class strategy. George developed Chicago players such as Susan Starrett, Dave and Pete Armstrong, Ellen Levin, Debby Waud, Susie Replogle, Beverly and Harrison Bowes, Bob Maramba, John Hare, and Wimbledon player Sue Eastman. All of these players left a mark as Illinois State High School Champions, Western Champions, and nationally-ranked players. George was very active in the tournament seeding of the Girls 16 National Clay Courts with Helen Shockley, poring over reams of paper in the days of no internet or computer-generated rankings. George also served as Varsity Head Tennis Coach for Lake Forest College in the late 50’s until his unexpected death in 1966.