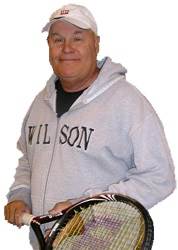 Jack, a Head Master Professional and nationally-recognized tennis coach, has been teaching tennis for the past 40+ years, the last 12 years at the Hinsdale Racquet Club. He has served on a number of U.S.T.A. Midwest Section Boards. During the 2014 ASICS Easter Bowl National Tournament in Indian Wells, California, Jack was presented with a Team USA Coaching Legend Award for a lifetime of tennis coaching and mentoring to up-and-coming juniors, college players, pro athletes and tennis professionals. He is also the recipient of the Midwest USPTA Coach of the Year Award. Jack has coached many ranked state, national, A.T.P. and W.T.A. players, some of whom have made it to the top 100 in the world. He is an expert in the finite skills of competitive tennis.

Jack Sharpe’s junior players have amassed over sixty (60) USTA gold balls alone, as well as dozens of silver and bronze balls for national and sectional success in singles and doubles. Recruited to ACC, SEC, Big Ten, PAC 12 and other conferences to play collegiate tennis, over 100 of his players have enjoyed distinguished individual collegiate careers and contributed to dozens of conference and national team championships.